Battery life is an increasingly urgent challenge for today’s untethered VR and AR devices. However, the power efficiency of head-mounted displays is naturally at odds with growing computational requirements driven by better resolution, refresh rate, and dynamic ranges, all of which reduce the sustained usage time of untethered AR/VR devices. For instance, the Oculus Quest 2, under a fully-charged battery, can sustain only 2 to 3 hours of operation time. Prior display power reduction techniques mostly target smartphone displays. Directly applying smartphone display power reduction techniques, however, degrades the visual perception in AR/VR with noticeable artifacts. For instance, the “power-saving mode” on smartphones uniformly lowers the pixel luminance across the display and, as a result, presents an overall darkened visual perception to users if directly applied to VR content.

Our key insight is that VR display power reduction must be cognizant of the gaze-contingent nature of high field-of-view VR displays. To that end, we present a gaze-contingent system that, without degrading luminance, minimizes the display power consumption while preserving high visual fidelity when users actively view immersive video sequences. This is enabled by constructing 1) a gaze-contingent color discrimination model through psychophysical studies, and 2) a display power model (with respect to pixel color) through real-device measurements. Critically, due to the careful design decisions made in constructing the two models, our algorithm is cast as a constrained optimization problem with a closed-form solution, which can be implemented as a real-time, image-space shader. We evaluate our system using a series of psychophysical studies and large-scale analyses on natural images. Experiment results show that our system reduces the display power by as much as 24% (14% on average) with little to no perceptual fidelity degradation. 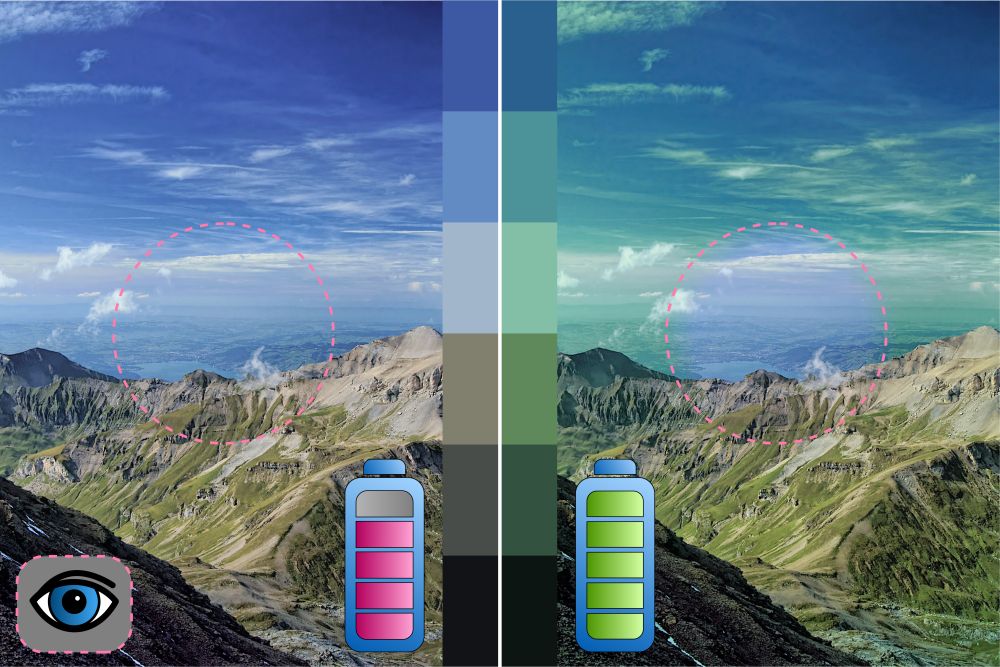